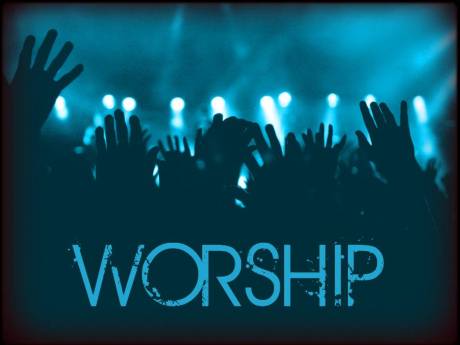 Are we to worship Jesus?

A brother wrote an interesting note today on our wall and stated that it is rather a tragedy that we have forgotten the Father in our worship. I do wholehearted agree with him. However he went on to say that ‘no where are we told to worship Jesus’. That I must admit is hard to swallow. I am not saying I differ. I would like to must looked at scriptures and see if Jesus is worshiped. This note is made out of love and not criticism. Please read it with that spirit.

Does the Father want us to worship His Son?

John 8:54
54 Jesus replied, “If I glorify myself, my glory means nothing. My Father, whom you claim as your God, is the one who glorifies me.

This is echoed in:

Hebrews 1:6
6 And again, when God brings his firstborn into the world, he says,
“Let all God’s angels worship him. ”

Which is taken from:

Psalms 97:7
7 All who worship images are put to shame,

those who boast in idols –

worship him, all you gods!

Again the Father directed worship to His Son!

John 8:56
56 Your father Abraham rejoiced at the thought of seeing my day; he saw it and was glad. ”

What actually did Jesus meant when Abraham rejoiced in seeing his day?

In Genesis 18:2 it is recorded that ” Abraham looked up and saw three men standing nearby. When he saw them, he hurried from the entrance of his tent to meet them and bowed low to the ground.” Note that Abraham bowed down.

Here is the reason why. It is stated that the LORD was among them. The word LORD in its actual form is YHWH. The Lord God Himself. See:

Genesis 18:10
10 Then the Lord said, “I will surely return to you about this time next year, and Sarah your wife will have a son. ”

Now Sarah was listening at the entrance to the tent, which was behind him.

Now turning back to:

What Jesus is saying here is lost in the English. In Greek he is actually saying “I, I am”, in Hebrew what he is saying is this “I am YHWH”. See:

He is the “I am” that spoke to Moses. “I am” in Hebrew is YHWH transcribed as LORD in our Bibles.

Let us now turn to another incident in:

1 In the year that King Uzziah died, I saw the Lord seated on a throne, high and exalted, and the train of his robe filled the temple.

Note here the word Lord is not in capital form. This is clearly Jesus. See also revelation (supra) And note that the angels are crying out Holy holy holy:

Isaiah 6:3
3 And they were calling to one another:
“Holy, holy, holy is the Lord Almighty;
the whole earth is full of his glory. ”
They were clearly worshipping.

Confirmation that the person the angels were worshipping was Jesus is found here below:

John 12:41
41 Isaiah said this because he saw Jesus’ glory and spoke about him.

Jesus is clearly the one whom the angels and Isaiah worshipped.

Also see the account of Jacob. The Bible tells us that God whom he worshipped appeared to him there:

1 Then God said to Jacob, “Go up to Bethel and settle there, and build an altar there to God, who appeared to you when you were fleeing from your brother Esau. ”

Who is this God? He is described as the stairway in which angels ascend and descend. See:

Genesis 28:12
12 He had a dream in which he saw a stairway resting on the earth, with its top reaching to heaven, and the angels of God were ascending and descending on it.

He then called this place Bethel:

Genesis 28:18
18 Early the next morning Jacob took the stone he had placed under his head and set it up as a pillar and poured oil on top of it.

The question is who did Jacob see and who did Jacob gave a tenth too? Note also in the olden days giving a tenth is an act of worship as it symbolizes that everything the tithe bringer has belonged to the recipient of the tithe. As such it is again a form of worship. Let’s see what Jesus said about Himself when he met Nathanael:

John 1:51
51 He then added, “I tell you the truth, you shall see heaven open, and the angels of God ascending and descending on the Son of Man. ”

Jesus in this verse clearly states that the person he gave 1/10 to was Jesus, the God he saw at Bethel. This was also the person Jacob built the altar for!

Again here it is clear that Jesus was worshiped.

Daniel saw the reign of Jesus as described in Revelation and said this:

Daniel 7:27
27 Then the sovereignty, power and greatness of the kingdoms under the whole heaven will be handed over to the saints, the people of the Most High. His kingdom will be an everlasting kingdom, and all rulers will worship and obey him. ’

Note even as a baby Jesus was worshipped:

Matthew 2:2
2 and asked, “Where is the one who has been born king of the Jews? We saw his star in the east and have come to worship him. ”

Matthew 2:11
11 On coming to the house, they saw the child with his mother Mary, and they bowed down and worshiped him. Then they opened their treasures and presented him with gifts of gold and of incense and of myrrh.

Matthew 28:9
9 Suddenly Jesus met them. “Greetings,” he said. They came to him, clasped his feet and worshiped him.

Luke 24:52
52 Then they worshiped him and returned to Jerusalem with great joy.

Acts 13:2
2 While they were worshiping the Lord and fasting, the Holy Spirit said, “Set apart for me Barnabas and Saul for the work to which I have called them. ”

Jesus himself accepted worship when Thomas offered it:

In all these Jesus accepted worship. Note the angels did not accept the worship of men with the exception of Satan and his demons. This happen when John worshipped an angel:

Revelation 22:9
9 But he said to me, “Do not do it! I am a fellow servant with you and with your brothers the prophets and of all who keep the words of this book. Worship God! ”

Acts 13:2
2 While they were worshiping the Lord and fasting, the Holy Spirit said, “Set apart for me Barnabas and Saul for the work to which I have called them. ”

Notice also Paul calls for worship to the root of Jesse, Jesus:

Romans 15:11-12
11 And again,
“Praise the Lord, all you Gentiles,
and sing praises to him, all you peoples. ”
12 And again, Isaiah says,
“The Root of Jesse will spring up,
one who will arise to rule over the nations;
the Gentiles will hope in him. ”

Paul also states that we should sing hymns and songs to Jesus:

Ephesians 5:19
19 Speak to one another with psalms, hymns and spiritual songs. Sing and make music in your heart to the Lord,

The context clearly refers to Jesus.

Then of course there is that famous passage in Phillipians:

Philippians 2
9 Therefore God exalted him to the highest place
and gave him the name that is above every name,
10 that at the name of Jesus every knee should bow,
in heaven and on earth and under the earth,
11 and every tongue confess that Jesus Christ is Lord,
to the glory of God the Father.

I would say that that is worship wouldn’t you?

Note that the saints were worshipping the Lamb that was slained
Revelation 5:12
12 In a loud voice they sang:
“Worthy is the Lamb, who was slain,
to receive power and wealth and wisdom and strength
and honor and glory and praise! ”

Revelation 5:8
8 And when he had taken it, the four living creatures and the twenty- four elders fell down before the Lamb. Each one had a harp and they were holding golden bowls full of incense, which are the prayers of the saints.

Note these are the same 4 living creatures that Isaiah saw. They bowed down before Jesus. The one who sat on the throne and thereafter also became the lamb.

Here again Jesus is and will be worshipped.

Also notice in Revelation the song of the Lamb is sung:

Revelation 15:3
3 and sang the song of Moses the servant of God and the song of the Lamb:
“Great and marvelous are your deeds
Lord God Almighty.
Just and true are your ways,
King of the ages.

It refers to the worship of the Lamb as God as the object of worship:

Revelation 15:4
4 Who will not fear you, O Lord,
and bring glory to your name?
For you alone are holy.
All nations will come
and worship before you,
for your righteous acts have been revealed. ”

I have come to the conclusion Jesus is  very much worshiped, as such I do not think that it is wrong to worship Jesus as suggested. However, we should also address worship to the Father. Shalom.